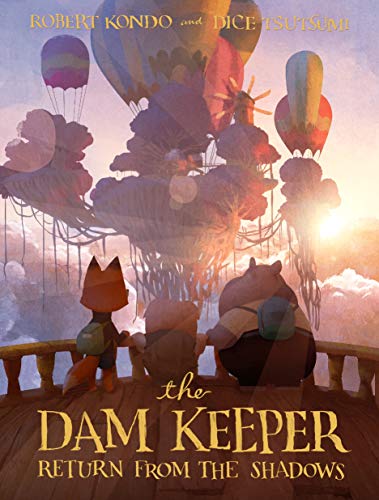 Reseña del editor Sunrise Valley is without a dam keeper, and time is running out. In less than twenty-four hours, the poisonous tidal wave of black fog will descend on Pig's home. While Fox, Hippo, and Van hurry east to warn the townspeople, Pig ventures on his own path. Pig is following a trail of clues that are inexplicably linked to his father, and now that trail is leading upward. What he finds on a floating island above the clouds will shake him to his core, but it just might be the answer he needs to save Sunrise Valley. Biografía del autor Robert Kondo was born and raised in the suburbs of Los Angeles. As a child, he learned art from his mother, a trained fashion designer, which led him to study illustration at the Art Center College of Design in Pasadena. For twelve years, he worked at Pixar Animation Studios as an art director on films like Ratatouille, Toy Story 3, and Monsters University. Dice Tsutsumi was born and raised in Tokyo. A graduate of the School of Visual Arts in New York City, Dice has worked as an artist at Blue Sky Studios on Ice Age, Robots, and Horton Hears a Who! and as an art director at Pixar on Toy Story 3 and Monsters University. Along the way, Dice spearheaded charity projects like the Totoro Forest Project and Sketchtravel. Together, Kondo and Tsutsumi directed the 2015 Oscar-nominated short The Dam Keeper and then founded their own studio, Tonko House, in Berkeley, California.