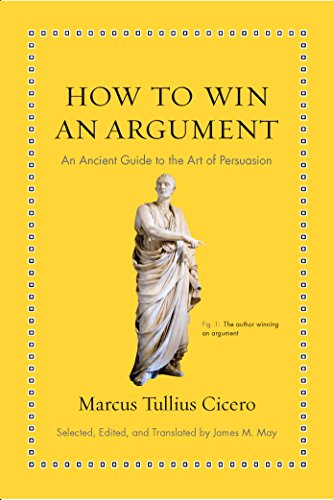 How to Win an Argument: An Ancient Guide to the Art of Persuasion (Ancient Wisdom for Modern Readers) (English Edition) por Marcus Tullius Cicero

Marcus Tullius Cicero con How to Win an Argument: An Ancient Guide to the Art of Persuasion (Ancient Wisdom for Modern Readers) (English Edition)

All of us are faced countless times with the challenge of persuading others, whether we're trying to win a trivial argument with a friend or convince our coworkers about an important decision. Instead of relying on untrained instinct—and often floundering or failing as a result—we’d win more arguments if we learned the timeless art of verbal persuasion, rhetoric. How to Win an Argument gathers the rhetorical wisdom of Cicero, ancient Rome’s greatest orator, from across his works and combines it with passages from his legal and political speeches to show his powerful techniques in action. The result is an enlightening and entertaining practical introduction to the secrets of persuasive speaking and writing—including strategies that are just as effective in today’s offices, schools, courts, and political debates as they were in the Roman forum.

How to Win an Argument addresses proof based on rational argumentation, character, and emotion; the parts of a speech; the plain, middle, and grand styles; how to persuade no matter what audience or circumstances you face; and more. Cicero’s words are presented in lively translations, with illuminating introductions; the book also features a brief biography of Cicero, a glossary, suggestions for further reading, and an appendix of the original Latin texts.

Astonishingly relevant, this unique anthology of Cicero’s rhetorical and oratorical wisdom will be enjoyed by anyone who ever needs to win arguments and influence people—in other words, all of us.