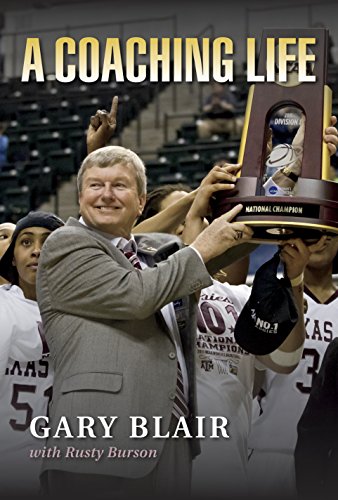 “It’s still difficult to describe the scene after the final buzzer sounded, because the moment was just so damned surreal,” writes head coach Gary Blair following the conclusion of the title game of the 2011 NCAA Division I women’s basketball tournament. “So many things happened that I will never forget . . . kissing my wife on the floor of Conseco Fieldhouse . . . looking toward the stands, where my grandson was . . . flashbulbs popping as the Aggie Band played triumphantly . . . our players and coaches wildly celebrating the biggest win in women’s basketball history at Texas A&M . . . tears streaming down the faces of former players . . . I remember thinking that I wished I could somehow stop time.”

This memory and countless others form the greatest treasure of Coach Blair’s life, as he makes clear in this engaging, inspiring memoir, written with veteran sports journalist and author Rusty Burson. Indeed, as Blair says, “What I cherish the most are the memories of these players and coaches.” Beyond the trophies, beyond the impressive won-lost record compiled over more than four decades of coaching, beyond even the ungrudging professional respect he has achieved among his peers in a fiercely competitive occupation, Gary Blair values the images, moments, and memories collected during a life spent doing what he loves most: coaching and mentoring young women on the basketball court.

In A Coaching Life, Coach Blair offers readers a “freeze-frame” view of a storied career. He serves up more than a few of his favorite memories with wit, grace, and humility. In the process, he invites readers to reflect on life’s wins and losses and, most importantly, what both have to teach us.