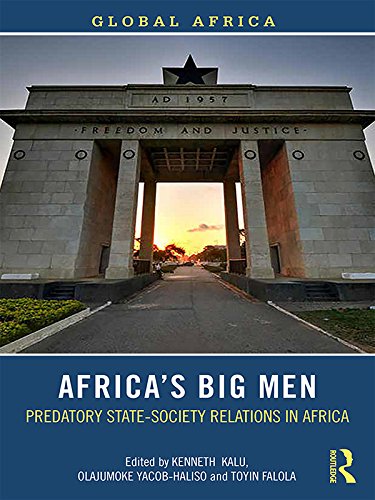 This book spotlights, analyzes and explains varying forms and patterns of state-society relations on the African continent, taking as point of departure the complexities created by the emergence, proliferation and complicated interactions of so-called ‘big men’ across Africa's fifty-four states. The contributors interrogate the evolution of Africa’s big men; the role of the big men in Africa’s political and economic development; and the relationship between the state, the big men and the citizens.

Throughout the chapters the contributors engage with a number of questions from different disciplinary and methodological orientations. How did these states evolve to exhibit various deformities in their composition, functioning and in their relations with the societies that they govern? What roles did Atlantic and other slavery and European colonialism play in creating states that are unable to display the right and good relationships with citizens in civil society? Why did these forms of predatory state-society relations continue to thrive in Africa after the end of Atlantic slave trade and subsequent colonialism? Why did the emerging African leaders at independence fail to effectively dismantle the structures of exploitation and expropriation that were the defining features of slavery and colonialism? Who are Africa’s ‘big men’, and what are their trajectories?

This book is essential reading for all students and scholars of African politics, public policy and administration, political economy, and democratisation.